Written by Cynthia on September 28, 2016. Posted in Michaelmas, Uncategorized

Persephone, Michaelmas and the Need for Living Thinking

As the days grow short again, and the year cycles around to the season of autumn, we stand once more in the autumn of the year. The fruits have of summer have ripened, and nature has given us of her abundance.
In Greek mythology, the richness of summer was brought forth, year after year, by the goddess Demeter. She is the archetypal earth-mother, and from her womb spring all the gifts of nature.
In time, Demeter brought forth a beloved daughter, Persephone, fathered by Zeus. The god of the underworld, Pluto des 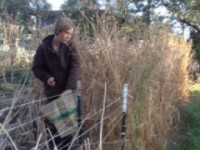 ired this beautiful child, kidnapped her, and took her to Hades, his underworld kingdom. Demeter deeply grieved her absence, and forbade any living thing to grow on the earth. In time, Persephone was released, but because she had eaten pomegranate seeds in the underworld, she was now compelled to live part of each year in the underworld. Her return in springtime enables vegetation to spring forth anew, having lain in the depths of the earth through the months of winter.
Yet when the time comes for her to return to the underworld in the autumn, the forces of nature withdraw, and the world turns brown, gray and bleak.
As with all true mythologies, this tells a story that is true on many levels and resounds in harmony with other creation myths. Just as the Bible tells of a paradisiacal past in the Garden of Eden, Demeter reigned during the Springtime of humanity. Then, when human beings left the Garden of Paradise, are were “exiled” to walk in the earth, told we would need to earn our food with the fruit of our brow.
Still, even in our exile, Nature continued to give generously to us, and we lived in the sweet Summertime of the planet.
We have now stepped into a new world age. The return of Persephone each spring becomes less certain each year, for Demeter, Natura, has grown old. Increasingly, we can see that we have harmed her and wounded her, and her illnesses are many.
The myth of Persephone also speaks of the human soul. We humans are children of both Heaven and Earth. And as we took our first steps on earth in the innocence of the Garden, we lived with the blessed confidence of hunters and gatherers, trusting that Nature would provide.
Now, however, it is our higher selves that have been kidnapped by the spirit of materialism. Our souls are held hostage by the forces of the underworld, surrounded by the forces of death and evil, even as we go about the affairs of our daily lives.
This is the root cause of our current societal and environment ills. All around the globe, the shadows of Mordor—as the dark kingdom is named in The Lord of the Rings—is spreading, manifesting in the rise of hate and fear-mongering in many segments of our national psyche. We need not look far to see the seeds of fascism sprouting. We see, too, the tragedy of the

refugees who dare to seek a land of light, escaping the violence of war zones and famines, and we see eco-systems devastated by climate change, melting ice caps, melting aquifers.
Emil Bock, a noted theologian of the Christian Community movement, called his age—the decades following World War II–the “Autumn of Earth Evolution.”
Yet because I believe in the mystery of mid-winter, the mystery of the spirit-birth of Christmas and the infinite possibilities of the human being, I face these days with steadfastness and courage. I know that evolution must take its next step—can only take its next positive step—if we human beings learn something new as a result of going through these dark times.
Where can we human beings turn for a new vision in this age?
With all of its microscopic and macroscopic intelligence, the natural sciences will not solve for us the urgent questions of morality we are facing. Nor can any religion that asks for blind faith give us a sure light to guide us through this darkness.
In this age, we can turn our gaze to another cosmic imagination, the presence of the Archangel Michael, the ruler of our age. He has been recognized and celebrated in many cultures under many names since the most ancient of days, for he has committed himself to supporting the evolution of human beings, the children of the universe.
Michaelmas, the annual feast day honoring his activity, is September 29. It falls rightly in the fall, shortly after the equinox, for he is the bearer of the spiritual forces that we need in this cosmic Autumn season. He, who believes deeply in the human being, is the archetypal hero of the knight who fights the demonic dragon that lurks everywhere in hate, death and destruction. In contemplating his bearing as a cosmic protective being, we can perceive the shortcomings of our own thinking. When our thoughts are “automatic,” non-creative and reactive, they bear none 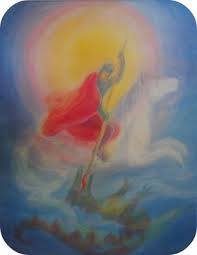 of the spirit consciousness that we are capable of. In this age, we are charged with the challenge to learn how to cultivate cosmically accurate thoughts with our consciousness. We must learn to reach beyond mere earth-thoughts and develop the capacity to understand things with the insights of the Gods. Michael-inspired thoughts and actions defend and protect the cosmic intelligence, in heaven as well as on earth.
Rudolf Steiner wrote that “the first creation has come to an end: the new creation begins with the Human Being.” Having lived with these powerful words for decades, I understand that only when we humans learn to transform the evil and death-bearing forces that live in our own souls can we create participate in creating a future as infinitely beautiful as the Garden once was.
And to do that, we must take hold of all the things that have been given to us “for free” by virtue simply of having been born. We must sanctify our bodies, we must transform the shadows in our feeling life, and we must learn to think in a completely new way. The old way of thinking can lead only to an increasingly death-affirming world. unless we can warm our thoughts with love and compassion.
What we must learn now is to “think with the heart.”
We must learn to how living thinking must become a practice that replaces automatic thinking. We must learn to warm our thoughts with love and compassion, born in our hearts as a result of our journey through the dark halls of Hades.
This is the message of this season, Michaelmas. In this year, with so much social-political-economic-ecological chaos, there is no place left to turn but to the deep resources of the heart, to those seed-forces that can be fructified by the very real love and wisdom of the universe. Such living thinking is literally not capable of being self-deluding and self-serving: such thinking shows us the way to actions that will sanctify this human race.
In this season of Michael, we can focus our meditations on the courage and insights we need to live rightly in this season of world-autumn. We will discover the right way to find the Sun forces that live on the earth, in the soul.

This, my favorite autumn poem, speaks of the beautiful and awful tumult we are all compelled to live through in this season of the Cosmic Autumn.

World dust, whirled dust, tossed and torn from trees,
No more do they labor for life,
no more shelter of green glade,
shade of apples under leaf,
Lifted in air they soar, no longer leaves.

What, wind that bears me, am I about to be?
Will water draw me down amidst its multitudes?
Earth, will I return?
Will I return to the trees?
Or by water go further from myself than I now can know
or dare?
(author unknown)