Written by Cynthia on October 28, 2018. Posted in Uncategorized, Zodiac

Scorpio, the eighth sign of the Zodiac, is the powerful central sign of autumn. In this northern temperate climate, this is the season when the bright reds and golds and oranges of the fall foliage finally drop from the trees and carpet the ground.  The naked skeletons of the trees, gray and black and brown against the darkening skies, stand as sentinels of death. The life-forces of the perennials have retreated into the earth: the seeds of the annuals lie beneath the leaves; the tiny buds of next year’s tree-green are tightly enclosed in protective sheathes at the end of the tree limbs. Nature asks the urgent question: what will the next spring bring? What can survive the time of cold and darkness, and rejoin the cycle of life, having passed through death?
Scorpio carries the double meaning of death and resurrection. It is a sign not only of the deadly scorpion and the serpent, creatures that wield the power of deadly poison, but also the sign of the eagle and the phoenix, birds that soar above the earth. The eagle plunges downwards with talons extended to catch its prey. This may mean death for the rabbit, but new life for the eagle, so it may soar ever higher in its flight.
The phoenix’s journey is even more spectacular. This mythical bird sacrifices its own life by willingly plunging into the fire, only to arise in a new, resurrected form.
All the images of Scorpio command us to consider how we live as humans spanned between life and death.

Scorpio and the World of Matter

Scorpio stands under the rulership of the spiritual beings known as the Exusiai, the Spirits of Form, also known as the Elohim. Under their domain, this world has achieved fixed form, a condition in which the limitless, infinitely creative and active domain of spirit has been slowed down, shaped, compressed and solidified. This world lies enchanted under the spell of death.
This is the challenge of Scorpio:
We live as spiritual beings in this world of matter. Our higher selves still, even now, exist in the sphere of spirit. Will we be able to awaken, remembering how to be ignite our God-selves? Will we serve creation through good deeds, done in love?
This path does not advocate abandoning ourselves to spiritual bliss or mindless-ness. This path shows us the way to awaken to full consciousness in the middle of this world of Form, of Darkness, of Death.
This path teaches us to have courage to go through the darkness, meeting it with courage and transforming it through deeds of love. On the other side of the autumn and winter of the soul there will be resurrection and new life. And so the Wheel of Life will continue to turn, as we evolve through the experiences of incarnation, of death, of re-incarnation.
Thus, even as Scorpio is the sign of death and resurrection, it is also the sign of healing. A true healer must understand how to bring forth the forces of life. These may, of course, come from the field of living things,  including the forces of nature and forces that stream from the planets. But they may also come from the field of the life-less. This is the healing work of the alchemist or the homeopath, who lead the material world to its final compression, allow it to dissolve into dust, and harnesses the formative forces that are released through the dissolution of the enchanted material world.
In this sense, the “laboratory becomes an altar.”

Scorpio in the Body

In the body, we find Scorpio forces wherever the forces of catabolism are active. We must be strong enough to tear down the inherent formative forces of all the food we eat, so that we can incorporate it into our unique, personal body through the anabolic processes. Scorpio rules over digestive forces that must break down the world of matter when it is digested.
The power of Scorpio also speaks strongly in the bones, the most material part of our body. There, in the core, or marrow, of the bones, new red blood cells are being constantly created, in astonishing volumes. This is the source of new life, new life rising from death.
Most significantly, Scorpio also rules over the reproductive organs in the body. In the deepest part of our bodies we carry the “holy of holies,” an organ system that carries the sacred seed of new human life. Here lies tremendous power, poetically equivalent to the power of nuclear fusion. Sexual energy has always been recognized as a two-edged sword: a path to dark power or self-serving lust, or a sacred path to profound union and love.
Finally, on a spiritual level, Scorpio also rules the brain. Here we are taken on a powerful journey to realize that the brain does not “think.” The brain processes do not “secrete” thoughts. Neurological pathways are established through our experiences in the sense world, and also by our inner processes. As spiritual human beings, we read the patterns in our neurons to have consciousness. However, as everyone who has studied meditation and inner work knows, the meanings that we derive from what the input from the sense world offers us is completely determined by the quality of our spiritual activity, and the effort we put into clear thinking. Consciousness soars as a phoenix out of the ashes of mere sense activity, out of the purely neurological phenomena of brain activity.

Scorpio as a Spiritual Activity

In many spiritual traditions, including the New Testament, we are instructed to “die, before we die.” Like the phoenix, we may consciously enter the domains in which death-forces rule, the region where creation has been frozen into its fixed forms, beyond the reach of the creation beings. There, in human freedom, we may arise as self-realized beings, offering our own works as deeds of sacrifice for the greater good.

The Eurythmy Gesture and the Sound of Scorpio 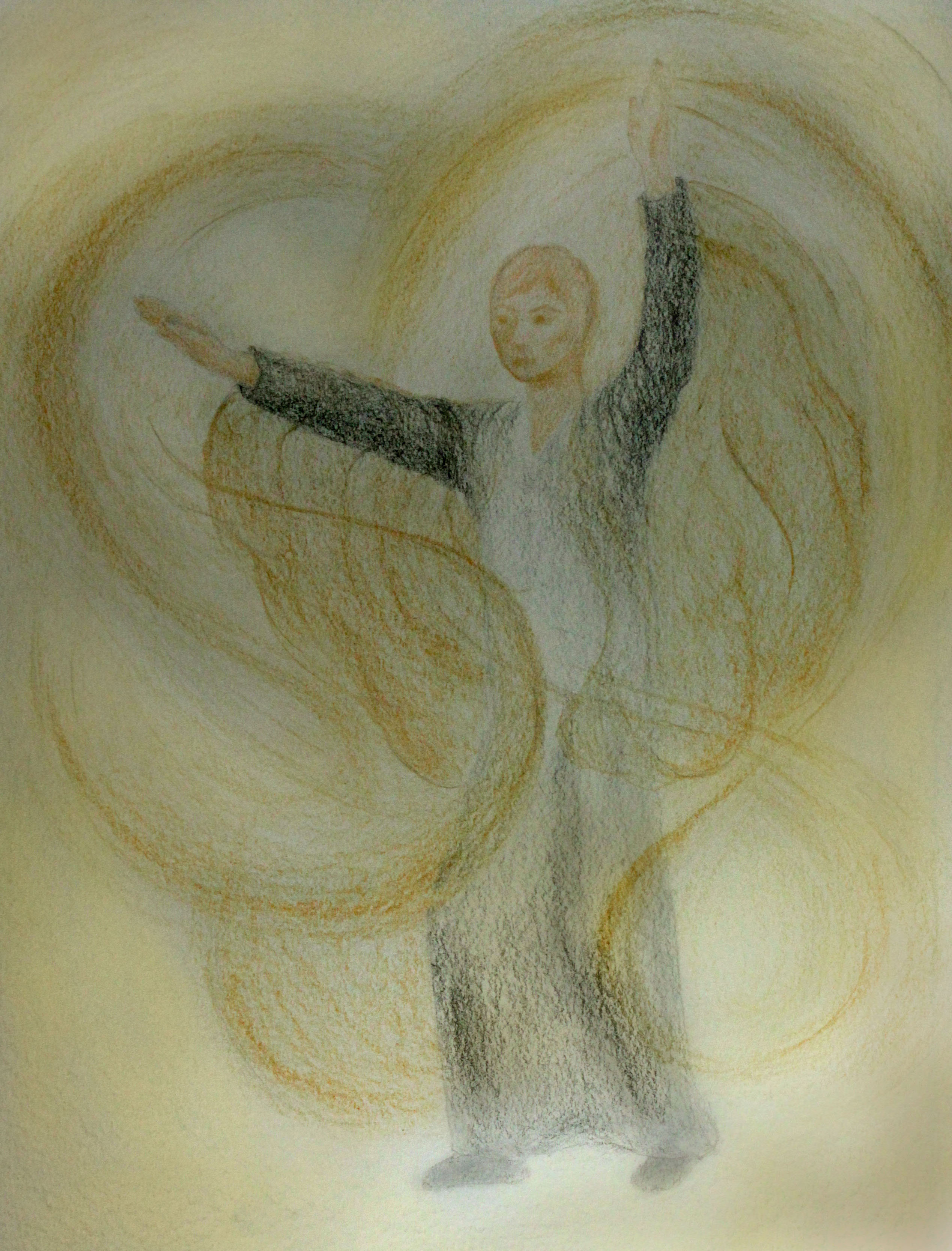 To make the eurythmy gesture for Scorpio, focus all your power on standing upright and centered, prepared to master the forces of death and healing. Let your left arm become like an iron sword. With this sword, you will penetrate the mysteries of death and dying, of healing. Hold your arm slightly in front of your left side. pointing into the earth, holding “dragon forces” under your firm control.
The sound of Scorpio is the S, which is possibly the most difficult sound to create. As the S rises from below upwards, it shows the higher nature of Scorpio, the eagle or the phoenix that spreads its wings and takes flight.
When S plunges from above downwards, it shows the eagle plunging to the earth to take its prey. It shows the sting of the scorpion, which is often deadly. It shows the serpent that cannot stand upright but crawls on its belly on the ground. There it reaches into the realms of matter and of death.
From there, it may overcome death to create the light of thinking, claiming resurrection and new life.
You may watch R.E. demonstrate the eurythmy sound for Scorpio and the sound S here:
https://s3-us-west-2.amazonaws.com/eurythmy-online/Scorpio.mp4
or here:
https://youtu.be/OB1O1O65vkQ